The Chinese garden is a landscape garden style which has evolved over three thousand years. It includes both the vast gardens of the Chinese emperors and members of the imperial family, built for pleasure and to impress, and the more intimate gardens created by scholars, poets, former government officials, soldiers and merchants, made for reflection and escape from the outside world.

The earliest recorded Chinese gardens were created in the valley of the Yellow River during the Shang Dynasty (1600–1046 BC). These gardens were large enclosed parks where the kings and nobles hunted game, or where fruit and vegetables were grown.

They create an idealized miniature landscape, which is meant to express the harmony that should exist between man and nature.

Every detail is important. Carefully selected, crafted and put in its proper surroundings.

Originally a classical private garden, the Lingering Garden (23,310 m2 ) is one of the four most famous gardens in China. Possessing typical Qing style, it is well-known for the exquisite beauty of its magnificent halls, and the various sizes, shapes, and colors of the buildings.

Like other famous gardens in Suzhou, the Lingering Garden seeks to create stunning natural landscapes within limited space. In it, domiciles, ancestral temples and private gardens are included. Buildings, trees, and flowers blend harmoniously with their surroundings.

Of the four parts, the central part is the essence of the whole complex. This part was the original Lingering Garden while the other three were added during the Qing Dynasty.

Lingering Garden was commissioned by Xu Taishi (徐泰时), an impeached and later exonerated official in 1593 CE. Stonemason Zhou Shicheng (周时臣) designed and built the East Garden (东园) as it was initially called.

Liu Su, another official in 1798 CE, reconstructed and renamed it Cold Green Village. He was an avid collector of Scholar stones or viewing stones( naturally occurring or shaped rocks which are traditionally appreciated by Chinese scholars), and added 12 more to the garden housing them in the ”stone forest”. The garden soon acquired the nickname ”Liu Yuan” from the owner’s surname. From 1823 CE the garden was open to public, and became a famed resort.

During the Sino-Japanese War, the garden was abandoned and it even degenerated into breeding zone for army horses. After establishment of the People’s Republic of China, Suzhou government took over and renovated the garden.

It was reopened to the public in 1954. In 2001 the garden was added to the UNESCO World Heritage list, and remains a major tourist destination.

To sum it up, a typical Chinese garden is enclosed by walls and includes one or more ponds, rock works, trees and flowers, and an assortment of halls and pavilions within the garden, connected by winding paths and zig-zag galleries.

By moving from structure to structure, visitors can view a series of carefully composed scenes, unrolling like a scroll of landscape paintings.

The Legend of the Isle of the Immortals 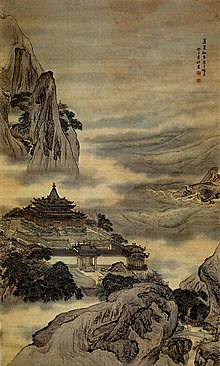 A miniature version of Mount Penglai, the legendary home of the Eight Immortals, was recreated in many classical Chinese gardens

An ancient Chinese legend played an important part in early garden design. In the 4th century BC, a tale in the Shan Hai Jing (Classic of Mountains and Seas) described a peak called Mount Penglai located on one of three islands at the eastern end of the Bohai Sea, between China and Korea, which was the home of the Eight Immortals. On this island were palaces of gold and silver, with jewels on the trees. There was no pain, no winter, wine glasses and rice bowls were always full, and fruits, when eaten, granted eternal life.

In 221 BC, Ying Zheng, the King of Qin conquered other rival states and unified China under the Qin Empire, which he ruled until 210 BC. He heard the legend of the islands and sent emissaries to find the islands and bring back the elixir of immortal life, without success. At his palace near his capital, Xianyang, he created a garden with a large lake called Lanchi gong or the Lake of the Orchids. On an island in the lake he created a replica of Mount Penglai, symbolizing his search for paradise. After his death, the Qin Empire fell in 206 BC and his capital city and garden were completely destroyed, but the legend continued to inspire Chinese gardens. Many gardens have a group of islands or a single island with an artificial mountain representing the island of the Eight Immortals.

Be Nice. Don’t copy without credit.

Love my family, photography, art, literature, architecture, flowers, trees and dogs, but most of all Nature itself. I also keep on travelling...